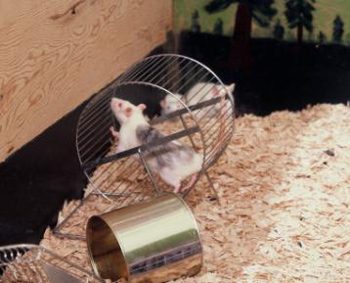 Why do we get addicted to certain substances or activities? These days we talk about addiction not only in connection with drugs and alcohol but a whole range of stuff like shopping, work, exercise, Internet use, food and sex. The following piece of research may explain exactly why this happens:

Addiction in a rat world

Between 1960 and 1980, being a rat in a psychology lab was not a pleasant experience… Although the rats lived in close proximity, they could neither see nor touch each other, because the sides of their cages were made of sheet metal. The only visual stimulation they got was seeing the people who brought food and water and cleaned the metal pans under their cages every few days.

Skinner Boxes were commonly used where the rats could get tiny pellets of food one at a time, provided they pushed a little lever on the side of the box over and over. It sounds shocking to us today, but the metal floor made it possible for the experiment to administer electric shocks when the experiment was about punishment rather than reward.
The Skinner Box was often used to study drug addiction. Techniques were developed that allowed the rats to inject small doses of a drug into themselves by pressing the lever. Under appropriate conditions, rats would press the lever often enough to consume large amounts of heroin, morphine, amphetamine, cocaine, and other drugs in this situation.
The mass media of the day were quite excited about these experiments. The results seemed to prove that these drugs were irresistibly addicting, even to rodents, and by extension, to human beings. However in the late 1970s, a man named Bruce Alexander thought this might not be the whole story and he started to look a little more closely at the research…

He compared the drug intake of rats housed in a reasonably normal environment 24 hours a day with rats kept in isolation in the solitary confinement cages that were standard in those days. This required building a great big plywood box on the floor of the laboratory, filling it with things that rats like, such as platforms for climbing, tin cans for hiding in, wood chips for strewing around, and running wheels for exercise. There were rats of both sexes and soon lots of baby rats were being born. They called it “Rat Park” and the rats loved it.

Over the course of several experiments comparing the drug consumption of rats in Rat Park with rats in solitary confinement in regular laboratory cages, it was found that the rats in solitary confinement consumed a huge amount more drug solution. The rats in Rat Park consumed hardly any morphine solution and it soon became clear to Alexander and his team that the earlier Skinner box experiments did not prove that morphine was irresistible to rats. Rather, most of the consumption of rats isolated in a Skinner box was likely to be a response to isolation itself. The results were published in the psychopharmacology journals but in the larger world of addiction theory it was pretty much ignored. Funding dried up and Alexander and his team focussed on other work.

What does this tell us about addiction?

Today’s psychology students are always taught about Rat Park and it is always a subject of great interest and debate but not in the wider world. Alexander later wrote a book (The Globalisation of Addiction: A study in poverty of the spirit, Oxford University Press, 2008) where he went back over what had been learned and tried to offer some kind of explanation.

He turned to the history of Western Canada, where he lived, although very similar historical data can be found in many countries. The English colonial empire overran hundreds of native tribal groups in Western Canada in the 18th and 19th century. The native people were moved off expansive tribal lands onto very small reserves, completely destroying the economic basis of their cultures. Their children were taken from their parents and sent off to “residential schools” to be taught the white man’s culture so they could be assimilated. They were forbidden to speak their native languages and found themselves strangers in their own communities when they finally came home.
Prior to the colonial conquest, the native people had some serious problems, of course, including frequent tribal warfare, with prisoners being killed or kept as slaves. Mental illness, personal betrayals, and epidemic diseases occasionally occurred in pre-colonial tribes. Basically, native people had all the problems of their English colonizers except one. There was so little addiction that it is very difficult to prove from written and oral histories that it existed at all. But once the native people were colonized alcoholism became close to universal. There were entire reserves where virtually every teenager and adult was either an alcohol or drug addict or “in recovery” and addiction was not limited to alcohol, but eventually encompassed the full range of addictions found in the wider society: drugs, television, gambling, Internet etc.

At first, the English settlers explained the universal alcoholism of the natives by talking about genetic vulnerability. They said “Indians just can’t handle liquor” and tried to solve the problem with strict alcohol prohibition.

Alexander said that there are parallels between the problems of colonized human beings and the rats in Rat Park. In both cases there is little drug consumption in the natural environment and a lot when the people or animals are placed in an environment that produces social and cultural isolation. In the case of rats, social and cultural isolation is produced by confining the rats in individual cages. In the case of native people, the social and cultural isolation is produced by destroying the foundations of their cultural life: taking away almost all of their traditional land, breaking up families, preventing children from learning their own language, prohibiting their most basic religious ceremonies (potlatches and spirit dancing in Western Canada), discrediting traditional medical practices etc. Under such conditions, both rats and people consume too much of whatever drug that is made easily accessible to them. Morphine for the rats, alcohol for the people.
In both cases, the colonizers or the experimenters who provide the drug explain the drug consumption in the isolated environment by saying that the drug is irresistible to the people or the rats. But in both cases, the drug only becomes irresistible when the opportunity for normal social existence is destroyed. In the case of natives of Western Canada, other historical information makes it perfectly clear that a simple genetic vulnerability to alcohol was not the cause of the devastating plague of alcoholism that occurred.

So perhaps our ever-changing modern society has produced social and cultural isolation in very large numbers of people, even though our cages are invisible! And perhaps this isolation has led to the high levels of addiction across the modern world.

If you are struggling with any form of addiction at the moment and would like to talk it over in complete confidentiality, call Alison Winfield, Mindfully Well Counselling Cork on 087 9934541.

Addiction and Self Sabotage