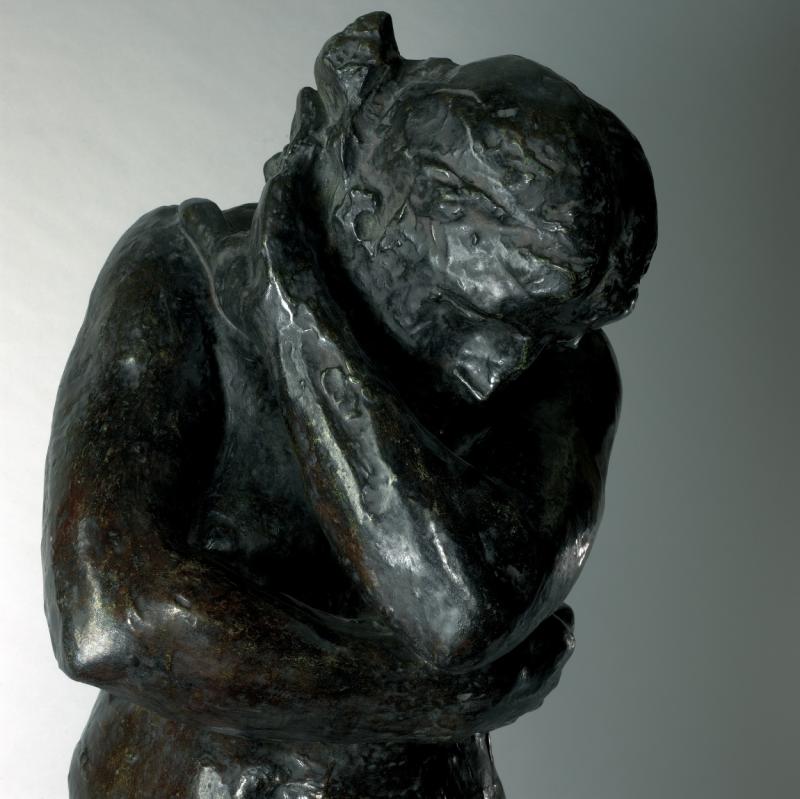 The image shows the biblical Eve covering herself and lowering her head in shame in sculptor Rodin’s famous statue. Of all the symptoms that can result from experiencing trauma, shame is often the most crippling and the hardest to resolve.  Actually I find myself talking about this un-talked-about emotion in many counselling sessions, whether a person has experienced trauma or not. It pops up everywhere – we all carry at least a bit of  shame even if we don’t like to admit it. We all know exactly what it feels like.

Shame is immediate and VERY physical. It feels absolutely horrible: we may blush deeply, drop our head, hunch our body, feel a sinking in our gut, break eye contact, have a sense of tunnel vision, a racing heart and a desperate need to leave the situation.

Shame can make us feel very alone. We play the slow motion reel of a recent situation over and over again and retreat into ourselves. It can overpower a person’s whole personality so that they don’t simply feel that “I made a mistake” but rather “I AM a mistake.” It is an emotion that parents can pass onto their children, and can even be passed down generations. A person may sometimes carry a sense of shame without knowing why, and it might even relate to events which occurred before they were born. This makes it difficult to access as we cannot heal what we cannot feel. The very power of shame lies in its secretiveness, its darkness.

(Just to note that shame is much more common after trauma involving harm caused by another person rather than an “impersonal” incident such as a vehicle accident.)

The difference between shame and guilt

It’s important to say that guilt and shame are two different emotions: Guilt is “I DID SOMETHING WRONG” and encourages us to make amends. Shame is more like “I AM WRONG” (or “I’m not good enough” or “I let myself and everyone else down”.) often it does not propel us to make amends but rather to continually beat ourselves up. Shame is never healthy or useful but guilt can be healthy and useful. Shame always leads to disconnection from others whereas guilt can lead to healing. Confessing our errors allows us to be vulnerable with others, so guilty feelings can prompt us to build a connection through communication or changed behaviour. Shame prevents us from feeling strong enough to confess our mistakes, making us defensive when others point them out.

The shame of nations: Germany and Ireland

It’s not just individuals who can experience it – entire nations can feel the burden of collective shame. In 2008 German chancellor, Angela Merkel delivered a speech in the Israeli Knesset where she said that her nation is “filled with shame” over the Nazi holocaust and that she bows before its victims.  Ireland has also its shameful past which we are gradually coming to terms with. A recent powerful documentary (Christina Noble: In a house that ceased to be) about the work and life of Dublin-born Christina Noble showed how her mission in life came about as a result of her own appalling childhood. Over the past 25 years she has saved an untold number of children, victims of neglect, poverty and abuse in countries such as Vietnam and Mongolia. After her mother died, she and her siblings were separated from their alcoholic father and from each other and placed in care by the courts. All four spent the rest of their childhoods suffering the worst that Institutions of State and church have perpetrated. Each of the siblings at one point believed (and indeed were told) the others were dead. In the documentary Christina said about others who had suffered as her she and her siblings did “The horrors they went through, with no one to tell…I pray that this will give them a little chance to feel that there is some justice. That they have a voice. They came out and carried the shame of being locked up and hid everything.”

Brené  Brown is one of the few researchers and writers in the area of healing shame and I have recommended her TEDtalk and book to many many clients – well worth checking out!

Book: I thought it was just me (but it isn’t) Making the journey from ‘what will people think ?’ to ‘I am enough’ by Brené  Brown

If you are struggling with the effects of trauma and shame or other issues  and would like to talk it over in complete confidentiality, call Alison Winfield, Mindfully Well Counselling Cork on 087 9934541.

Trauma and the body

The REWIND technique for trauma recovery